Titina was a real dog who led an extra ordinary life, taking her from a harsh existence in Rome’s back alleys to a lofty view over the North Pole. Inspired by true events, the film works on different levels to make it enjoyable for both children and adults.
IMDb 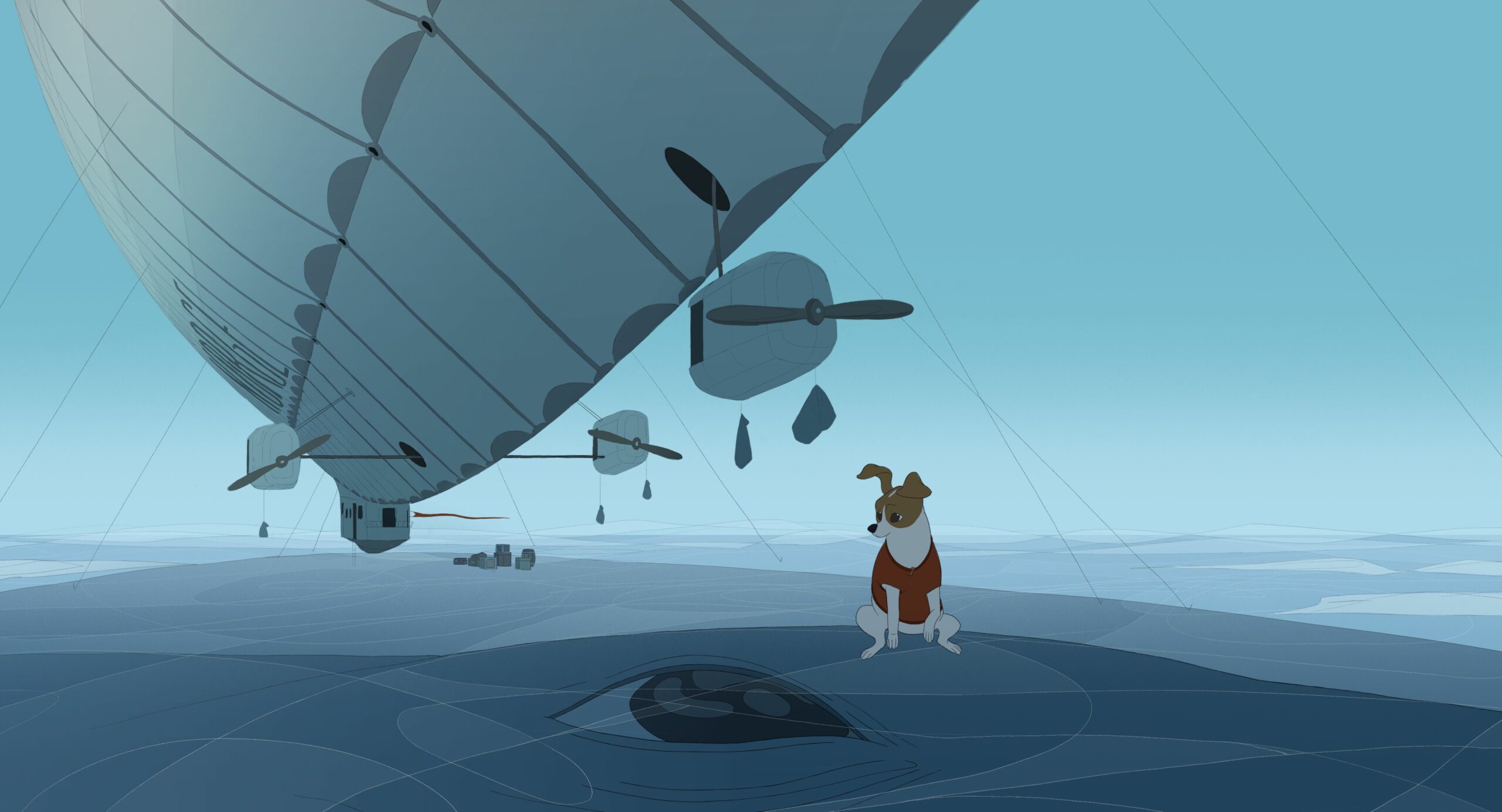 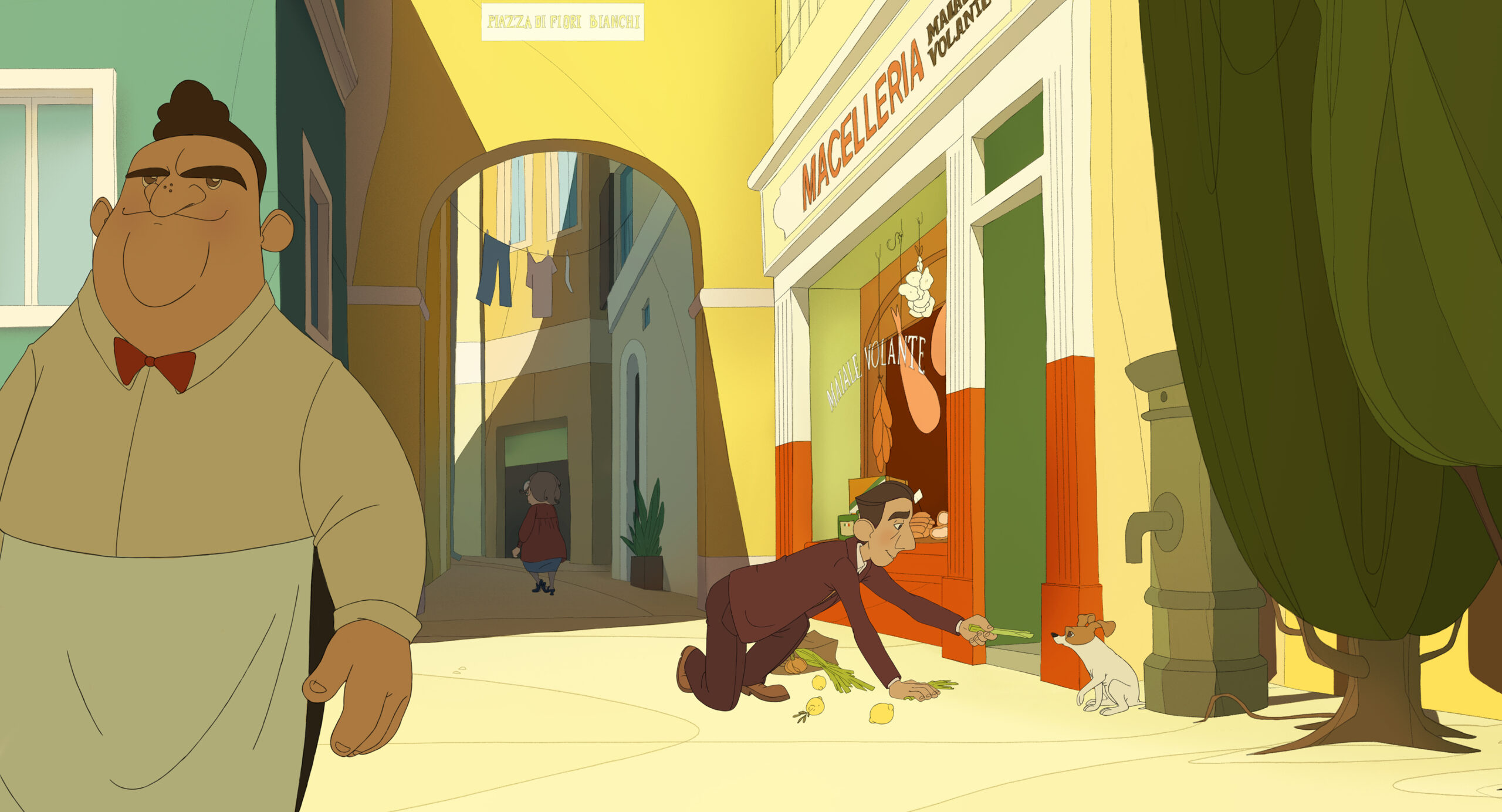 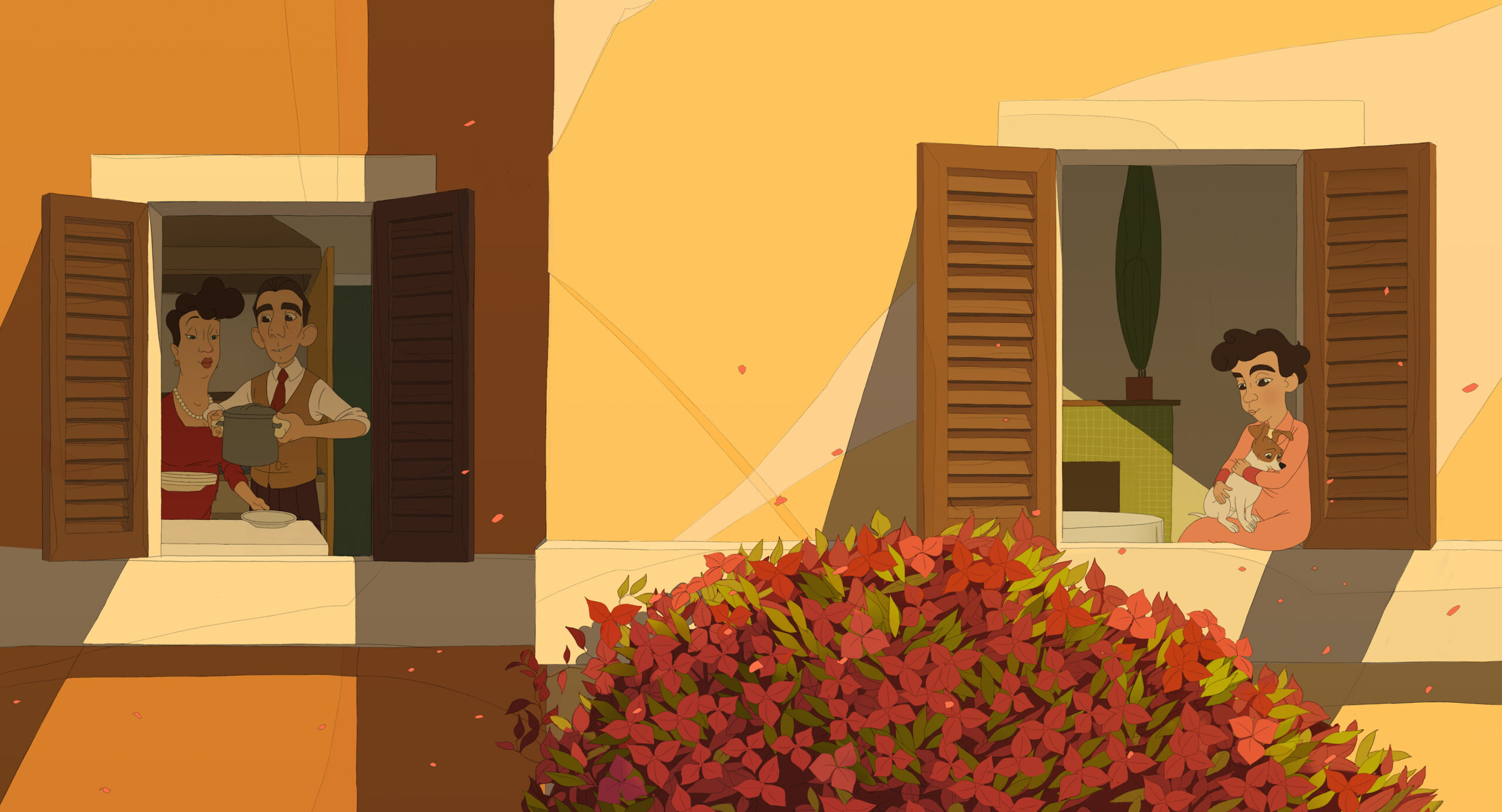 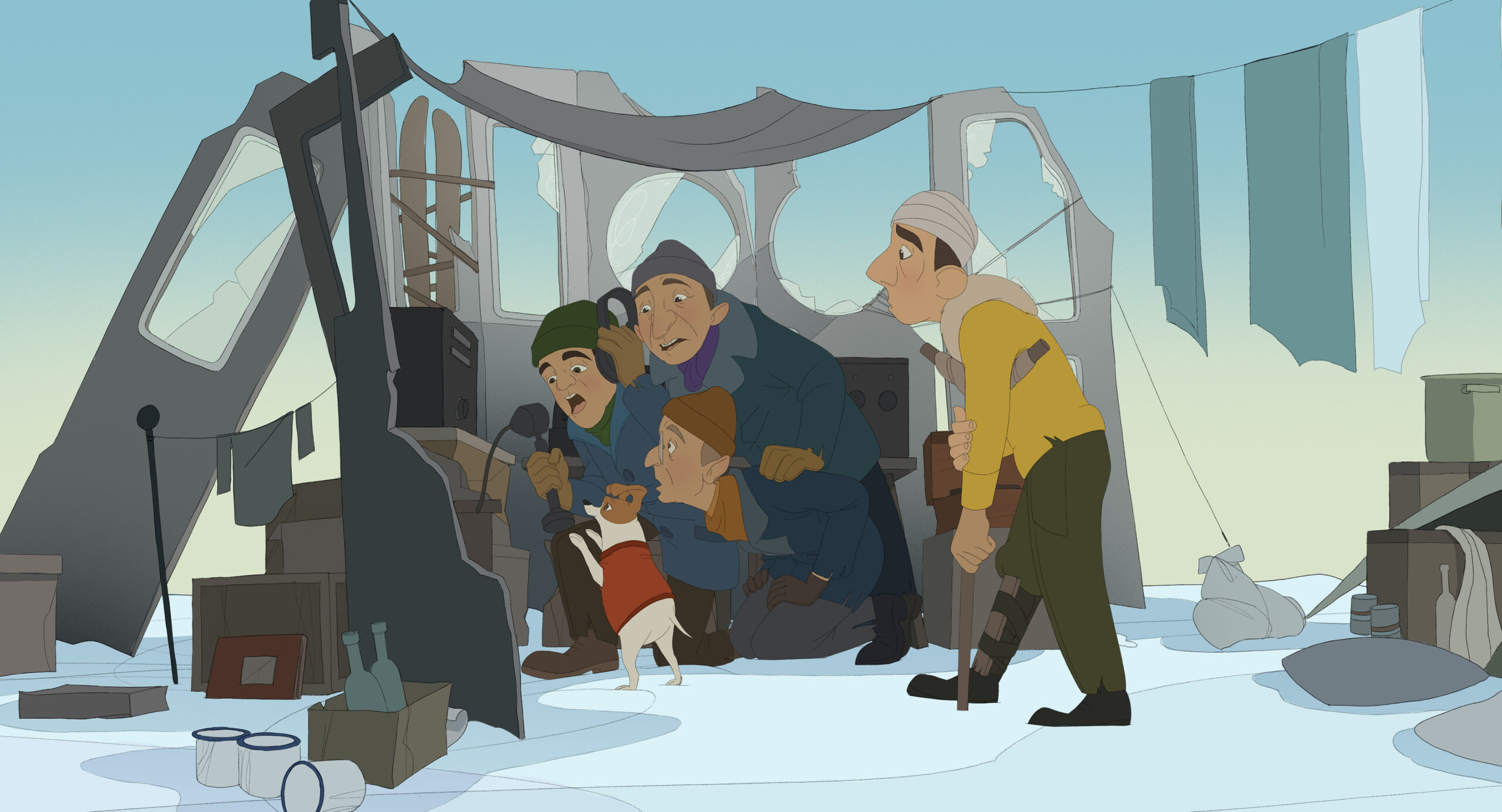 Titina tells an entertaining and exciting story of an almost forgotten voyage of discovery: The conquest of the North Pole by airship in 1926.

Italian airship engineer Umberto Nobile enjoys a quiet life with his beloved dog Titina, who charmed him into rescuing her from the streets of Rome.One day, Norwegian explorer superstar Roald Amundsen contacts him and orders an airship to conquer the North Pole. Nobile seizes the opportunity to go down in history. He brings his little terrier Titina along, and the unlikely trio sets out on an expedition to the last undiscovered place on Earth. Their quest is successful but, in the aftermath, the two men start to quarrel over the glory... Through the eyes of the four-legged celebrity Titina, (re)discover a true story of triumph and defeat.

Titina
The tiny terrier Titina is a true charmer and reveals all her emotions with unmistakable doggy body language. The pragmatic dog purposefully enchants Nobile, who rescues her from a harsh life on the streets of Rome and names her after a hit song by Billy Murray (Titina, 1925). Titina loves comfort and the good things in life, which she consumes and enjoys without hesitation. When Nobile takes her in, she has everything she needs: food, shelter and affection. She has no enthusiasm whatsoever for dramatic expeditions and is totally unsuited for polar adventures. Titina’s perspective reveals how small motivations can drive great men.

Umberto Nobile
Nobile is a brainy, and somewhat soft fellow. He’s fond of jazz music and continental comforts. His dream was to become a pilot. But he’s too short and ended up as a brilliant airship engineer. Nobile is a man who practices his profession confidently and with mastery. Though recognized for his great technical skills, he does perhaps not recive the admiration he deserves. Passionate, he truly believes that almost anything can be solved with airships. He is a modern, intellectual man with a keen interest in art and politics, well-read and sophisticated. Nobile is gentle, caring, and sensitive. He loves Titina and to go anywhere without her is unthinkable, even to the North Pole.

Roald Amundsen
Amundsen is world-famous as the ultimate polar explorer. He is driven by an obsession to be the first where no man has gone before. His ambition knows no limits, and he won’t allow anything to get in his way. Amundsen is strategic and fearless. He is stubborn, determined, with highly developed tunnel vision. He appears to be a generous man, upright and principled, but always keeps his eyes on the horizon, and doesn’t necessarily notice other people’s feelings.

author
Kajsa Nass is known for her playful, humorous and humanistic films. Her award-winning shorts have featured in prestigious festivals such as Clermont-Ferrand, Annecy and Tribeca. In addition to her many film awards, Nass has been granted the Norwegian Ministry of Culture’s Human Rights Award. Her dozen credits include It Was Mine (2015), It’s Up To You (2013), Deconstruction Workers (2008), Leonid Shower (2004) and Mother Said (1999). Kajsa founded the Oscar winning studio Mikrofilm together with producer Lise Fearnley in 1996.

author's statement
I came across this particular story by chance. I was surprised that I hadn’t already heard of it, because this was a huge media event in the 1920s, and the airship makes it such a spectacle. But it faded into history over time, and most Norwegians today don’t know how Amundsen died or that he disappeared searching for Umberto Nobile. So even though Amundsen himself is an icon, this part of his life is less known. The presence of Titina is another thing that drew me to this story. As Norwegians, we all know that if you bring dogs to the polar region, they have to work, or you should be able to eat them. The Arctic is no place for little lapdogs. Why would you bring a pet to such a place? It’s very strange to me. This made this story so interesting. And how did it actually work to have a tiny dog travelling in an airship? I was also charmed by the airship itself. It’s so large, and so fragile, and so strange. The image of the airship against the polar landscape worked so well, along with this little dog.
- Kajsa Nass

true story
On May 12, 1926, the Norwegian polar explorer RoaldAmundsen, the Italian airship engineer Umberto Nobile, Nobile’s dog Titina and the crew of the airship “Norge” became the first to fly over the North Pole. Numerous explorers, including Amundsen himself, had tried to reach this last white spot on the map for decades. At the time, no one knew what they would find at the pole, and especially in the area between the pole and Alaska, Amundsen hoped there would be unexplored land. The Norge expedition was sponsored by the adventurous American millionaire Lincoln Ellsworth and a Norwegian foundation for aeronautic travel (Norsk Luftseiladsforening). The Italian state led by Benito Mussolini agreed to sell the airship for 75.000 USD and then buy it back after the expedition for 46.000 USD, and hence Italy was an indirect sponsor of the voyage. The airship was designed by Umberto Nobile prior to Amundsen’s plans, but Nobile modified it for flight in arctic conditions. The official name of the expedition was the “AmundsenEllsworth-Nobile Transpolar Flight”, but in the popular press it was entitled “From Rome to Nome”. The press attention was massive, and Titina became a star. During the expedition, she had her own diary in The New York Times.
The airship took off from the Norwegian island Svalbard on May 11, and the next day, they reached the North Pole. It is impossible to land an airship without dozens of people and infrastructure on the ground, so they flew over this geographic landmark and threw flags out of the window to mark the conquest. The pole turned out to consist of nothing but drifting ice and there was no land between the Pole and Alaska either. Due to bad weather, the airship Norge crashed in Teller rather than Nome in Alaska. The expedition was still a triumph, but in the aftermath, Amundsen and Nobile got embroiled in an undignified public quarrel over the glory. Nobile established a second expedition to go up to the North Pole again in the airship Italia. The official reason was to carry out scientific research, but the popular opinion was that Nobile wanted to redeem himself and prove that he was capable of reaching the pole without any Norwegians onboard. In 1928 he was ready with and all Italian crew (except one Swede and one Czech), initiated by himself and backed by the Italian Royal Navy and the City of Milan. The Navy was naturally controlled by Mussolini and, being a communist, an alliance with the fascist dictator must have been a tough call to make for Nobile. And this time disaster struck. The airship Italia reached the North Pole, but on the way back to Svalbard, they were caught in terrible weather. The airship crashed in the remote Arctic and the balloon itself flew away with men flung to their certain death. Eight crewmen died, and Nobile broke his leg, ribs, and skull. Nobile, Titina, and the other survivors spent up to six weeks stranded on the ice, while numerous rescue operations were mounted. Search parties from many nations took part, and the rescue operation became the biggest mediated event of the 1920s. Amundsen also wanted to contribute to the search. He was eventually denied access to the official Norwegian operation but managed to get French backing and flew out with a crew of four Frenchmen and one Norwegian aviator. They took out from Tromso on the Norwegian mainland and set course for the Arctic Island Svalbard. No one had flown this distance before, and the seaplane Latham 47 might not have been fit for such an extreme journey. They most likely flew into bad weather, and something went terribly wrong. The aircraft disappeared. Amundsen, his crew and the plane got lost, never to be found. Eventually, Nobile and Titina were flown out by airplane, ahead of their crewmen against Nobile’s wishes. He wanted to stay with his men, but the order from Mussolini was to bring Nobile out. Consequently, Nobile was derided in the press, blamed for Amundsen’s death and for abandoning his men.
His surviving crew were later rescued by a Russian icebreaker. Titina was the first animal to become an international super star. After finding fame in 1926, she visited Japan, was invited to the White House, and toured Hollywood. This dog’s unlikely life triggered our imagination, and we realized that telling the story about Amundsen and Nobile with Titina at the centre gave us the opportunity to shape a very different polar epic.

Lovely and lively animals for the youngest audience. No dialogues.

No Man Is an Island Septembrska klasa