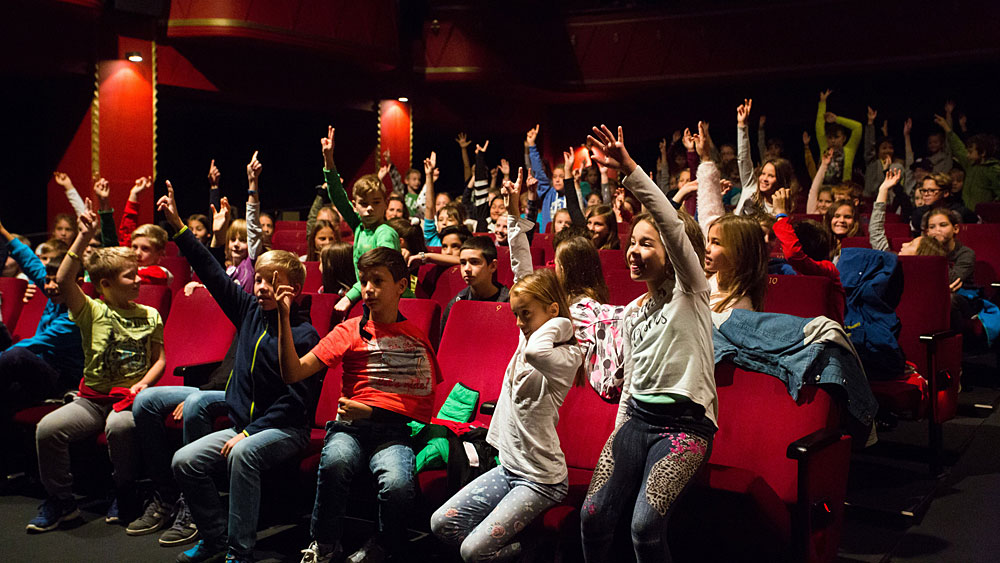 The Latest Updates in Film Education

Kinodvor’s programme for young audiences: from Cinemini Europe to the latest updates in film education.

Cinemini Europe has gained support from Creative Europe’s MEDIA Film Education programme following a successful tender for funding in 2018. Alongside Kinodvor and under the leadership of the Dutch EYE Film Institute are the German Film Institute from Frankfurt, Holland’s Taartrovers children’s film festival and the Austrian Film Institute based in Vienna. This offers Kinodvor and our European partners a brilliant opportunity to deepen our understanding of methods in film education for the very youngest audiences.

Cinemini Europe has gained the support of Creative Europe, which will contribute €251,844 to our project. It is one of seven successful film education projects for which the European commission has intended €2m. While pre-school children today are widely exposed to film and other audiovisual content, educational approaches have yet to be developed to suit this particular age group. Therefore, the central aim of Cinemini Europe is the development of specific programmes of film education for younger viewers aged between three and six. Cinemini Europe will run in three phases: developing content, testing and evaluation. Across the project there will be a concerted focus on sharing the experience and knowledge of other proponents of film education across Europe. Using the resources of Creative Europe / MEDIA research until October 2020, the project partners will gather a range of film and education content to engage the youngest viewers (aged 3-6) in the art of film.

Together, they will prepare a diverse selection of quality films for the very youngest of audiences, including a focus on film classics as well as abstract, independent and experimental film. A programme of short films will be presented along with a creative game, installations, discussions, workshops and teaching guides. A range of educational materials will be provided for adults, as well as for the children to explore individually. We will invite families, kindergartens and professionals from the fields of film education and evaluation to collaborate and appraise the progamme. In 2014, Kinodvor successfully participated in the ‘European Framework for Film Education’, a project led by the British Film Institute and counting the Slovenian Film Center among its participants.

‘Kinodvor has been invited to participate in the project along with the most experienced champions of film education in Europe – the German, Dutch and Austrian film institutes. This is a unique opportunity to deepen our knowledge and understanding of the very youngest of audiences and to encourage a wider European exchange within the field. Here at Kinodvor, we already work with Kindergartens through our Kinobalon programme, and have last year established a new programme First
Timers . This project is an opportunity to strengthen these existing programmes and enrich them with films from the rich collections of the aforementioned institutes.’
– Petra Slatinšek, director of the young audiences programme at Kinodvor.

Optional subjects in film education to be offered at schools

The Professional Council of the Republic of Slovenia for General Education has this summer accepted new curricula for optional subjects in film education in primary and middle schools. Teaching of both subjects will begin in the 2019-2020 academic year.

In the 2017-2018 academic year, three high schools in Ljubljana, Nova Gorica and Ljutomer have established new theatre-film departments. It is a welcome innovation in the field of education as there has previously not been a systematic teaching of film in middle school. The direction of theatre-film education at arts schools has paved the way for these curriculums to join general, vocational and classical high schools and primary schools as an optional subject in 2019-2020.The curriculum for an optional film module at primary school level is made up of three modules at 35 hours and is intended to run over the final three years of primary school education. The middle school curriculum will be made up of four modules running over 35 hours and can be offered to fill unallocated periods in high school. Teaching of both curricula will begin in the 2019-2020 academic year, prepared and launched by the institute of education and the AGRFT’s Department of Film and Television, along with private organisations and other film institutions involved in film education. Both curriculums will be written by an interdepartmental group in tandem with the preparation of a wider strategy to roll out a national programme of film education, with Petra Slatinšek, Kinodvor’s young audiences programme manager, closely participating.