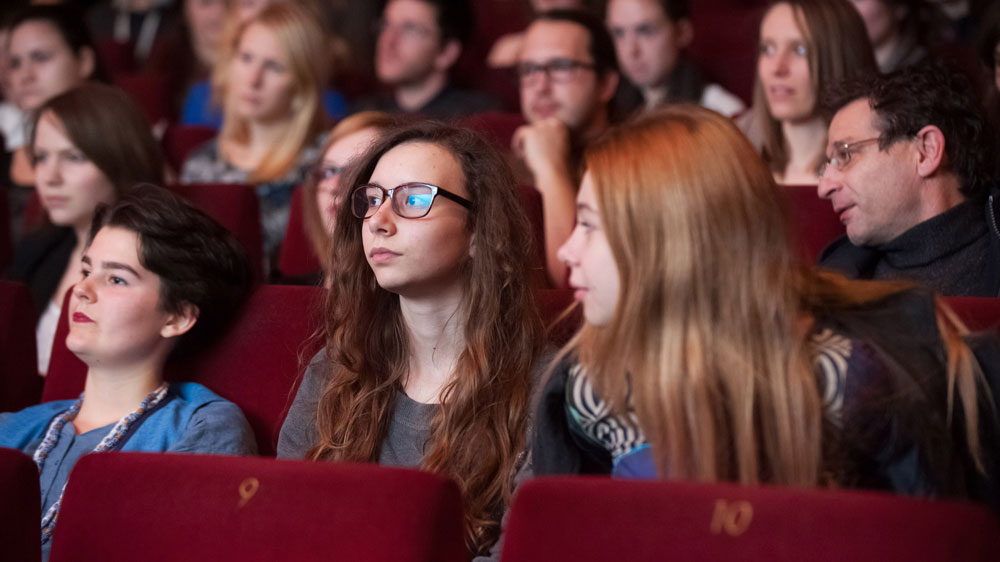 Women at the Movies - International Conference

Talks on ‘Women and Cinema’ tend to focus on what we see on the screen, rarely on the spectators. Issues of representation, talks about quota, discussing the work of women behind and in front of the camera, the percentage of films by women at major film festivals, malpractice and abuse in the film industry, … have become common themes and topics. With this conference we want to turn our gaze toward the –usually neglected– topic women in the audience.

Especially when it comes to quality art-house cinema — the cinema that is more than mere entertainment — women have come to play a significant role in maintaining and promoting the movie-going experience. One of the purposes of the conference is to start the debate on audience development by looking at women at the movies in a number of different periods and contexts.

The distinguished international film professionals who will be addressing women’s film-going practices are film historian, curator and professor of Film and Media History at Birkbeck College Ian Christie; Dutch film-critic, philosopher and lecturer and founder of the Slow Criticism Project Dana Linssen; Cinema Producer and curator at Cultural Cinema Watershed Tara Judah; and Associate Professor of Cinema History at the University of Utrecht Judith Thissen. Head of Program at Kinodvor Koen Van Daele will be sharing some information on female audiences in the first ten years of Kinodvor.

This conference is open to all public, but intended especially for all working in –or with– film. Film-programmers, producers, filmmakers, distributors, critics, film educators, students, …
Free admission! All lectures will be in English. Simultaneous translation in Slovene will be provided.

The conference is organised by Kinodvor on the occasion of the 25th anniversary of the International Festival of Contemporary Arts CITY OF WOMEN. The conference is part of Ljubljana, Candidate City for European Capital of Culture 2025 (ECC 2025).

10:15 Judith Thissen: Ladies Kindly Remove your Hats: Female Movie Fans in New York City and the Making of a Mass Medium
In the early days of the cinema, there was a lot of talk about female movie fans, their behaviour, film preferences and fantasies. But what exactly did going to the cinema mean to these women? Who were they and where did they go to watch movies? What films did they see? By looking at film culture in New York City in the 1910s and 1920s, we get a sense of the role that cinema played in everyday life a century ago and discover how female audiences helped to turn the new film medium into America’s favourite mass entertainment.

Judith Thissen is Associate Professor of Cinema History at Utrecht University in the Netherlands. She is specialized in the social history of moviegoing and well-known internationally for her research on Jewish immigrant film culture in New York City in the early 20th century. In recent years, her work has partially shifted towards European film history and the relationship between cinema and rural modernization.

11:00 Ian Christie: Where were the women?
We know that women formed a major part of the traditional cinemagoing audience – indeed they were deliberately targeted by the first cinema owners, with gifts and tempting publicity. Cinema was one of the first public entertainments that women could attend, either singly or in groups. But much of the history of film spectatorship has ignored the importance of women in deciding what’s made and what’s seen. A large survey carried out in Britain in 2011, Opening Our Eyes, started to explore gender, ethnicity and age in film preferences. But there is still much to discover about what women, as distinct from men, are attracted to; and how they value the cinema experience differently.

Ian Christie (www.ianchristie.org) is a film historian, curator and broadcaster. He is former vice president of Europa Cinemas. In 2006 he was Slade Professor of Fine Art at Cambridge University, with a series of lectures entitled “The Cinema Has Not Yet Been Invented.” A Fellow of the British Academy, he is Professor of Film and Media History at Birkbeck College and director of the London Screen Study Collection. He has written and edited books on Powell and Pressburger, Russian cinema, Scorsese and Gilliam; and contributed to exhibitions ranging from Film as Film (Hayward, 1979) to Modernism: Designing a New World (V&A, 2006). Publications include The Art of Film: John Box and Production Design (2009), and articles on Méliès, Patrick Keiller, early film copyright, and film in the museum.  In 2012 he edited the book Audiences: Defining and Researching Screen Entertainment Reception (Amsterdam University Press, 2012). In October 2013 he delivered a keynote speech at the Ljubljana conference on ‘The Place of Cinema: on the Place and Meaning of the Cinema’ (Kinodvor, 2013). He also participated at the conference on film literacy ‘Film Education in Cinema’ (Kinodvor, 2014).

13:00 Dana Linssen: The Mediator is the Message – Or is She?
Every film critic has an ideal or imaginary reader, but what do we know about “the audience”? Do we write for them or for the film, the film makers, or even film history? From her long term practice as a critic, editor and mediator Dana Linssen talks about the shifting perspectives on cinema, film exhibition, audiences and readerships, and the bigger role of the debates around female representation and agency. How do they bring us closer to the actual audiences in the cinema?

Dana Linssen is a Dutch film critic, philosopher and writer. She was editor-in-chief of de Filmkrant magazine from 1998 to 2019; is long-term film critic for NRC Handelsblad; founder of the Slow Criticism Project, a counterbalance to the commodification of film criticism and curator of the Critics’ Choice at the International Film Festival Rotterdam. She is expert at the Berlinale Talents and mentor at Talents Sarajevo. She is lecturer at ArtEZ and HKU University of the Arts. She is also recipient of the Louis Hartlooper Award for Film Journalism and of the Silver Rosebud Award for her work as a film critic at large and at de Filmkrant.

13:30 Tara Judah
From venue produced, to pop up and national touring film programmes in the UK, there is a rise in curatorial activism that hopes to bridge an historical gender gap in representation in the sector – both in front of and behind the camera. This cultural shift in curatorial approach hopes to hit an annual target of between 50-60% female identifying audience attendees. Focusing on recent programme case studies, this paper will look at curatorial perceptions of and approaches to so-called ‘women’s films’ in the UK’s independent film sector.

Tara Judah is Cinema Producer at Bristol’s Watershed, and has worked on the programming and editorial for the cinema’s archive, classic and repertory film festival, Cinema Rediscovered since its inception in 2016. Prior to her post at Watershed, Tara was Co-Director at 20th Century Flicks video shop, programmed films at Cube Microplex in Bristol, for Australia’s iconic single screen repertory theatre, The Astor, and for Melbourne’s annual feminist film event, Girls on Film Festival. She has written for Senses of Cinema, Desist Film, Monocle and Sight & Sound and has dissected cinema over the airwaves in Britain and Australia for Monocle24, BBC World Service, Triple R, ABC RN and JOY FM.

14:00 Koen Van Daele
When we think about women at the movies we tend to –stereotypically– associate this with genres such as melodramas and romantic comedies, marketing strategies such as Ladies’ Night, etc. and easily relegate the whole notion of ‘women’s film’ to commercial spheres and multiplex contexts. We believe that art-house programming is all about bringing the very best quality films to men and women of all generations. But everyday practice reminds us that gender does play a significant role in our cinemas, not only in what we present on screen, but also about what we offer as venues. If a film doesn’t work with our female audiences, it doesn’t work at all. Women are not only the core audience of our art-house cinemas, they are also the principle decision makers as far as maintaining the moviegoing experience is concerned. In order to be able to keep on attracting (new) audiences to our cinemas, we need to consider women’s vital role in our audience development strategies.

Originally from Belgium, Koen Van Daele has been working in culture since 1984. He was head of the audiovisual department of the Flemish Theatre Institute. He was co-founder and co-director of the Brussels-based centre for art and media ARGOS. In 1993 he moved to Slovenia and worked as curator on numerous film and arts related projects. In 1995 he joined the team preparing for the first edition of City of Women and co-curated the festival for the next eight years. From 1999 to 2006 he was head of the programme department of the Slovene Cinematheque. He was director of Zavod Otok and curated the 4th edition of the Kino Otok – Isola Cinema film festival. Since 2008 he is in charge of program at Kinodvor.